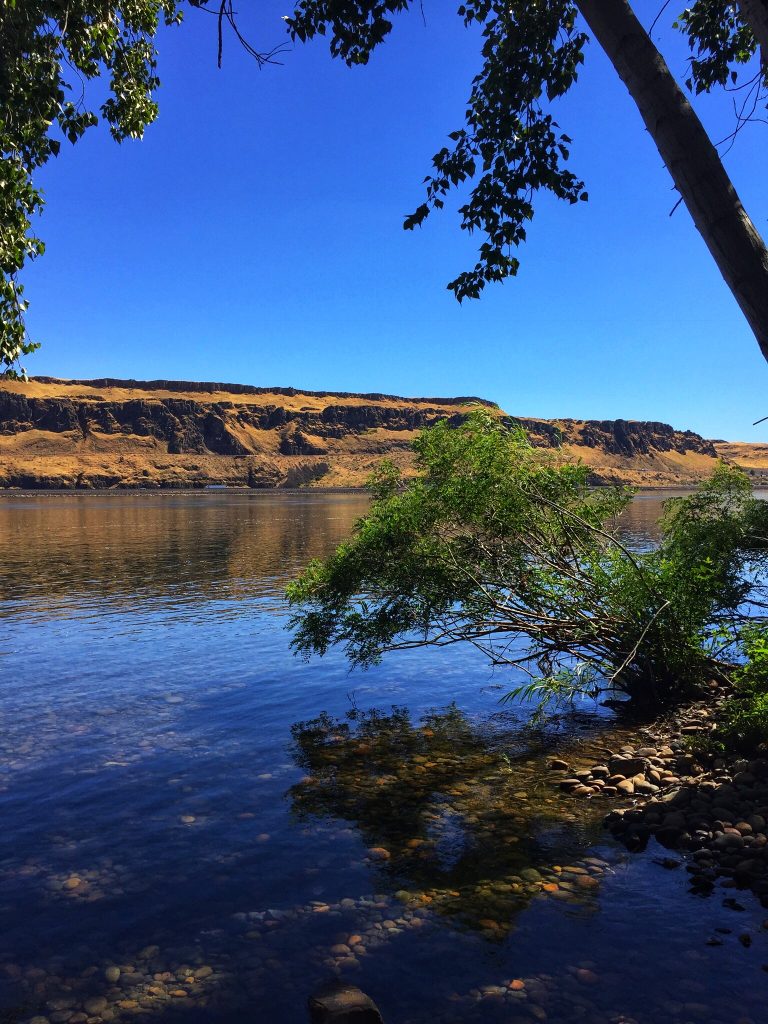 On this trip, we decided to stay a little closer to home, which is Washington State, and take a scenic RV trip to Crater Lake National Park, through Central Oregon.  We started our trip heading down Hwy 97 from Washington into Oregon. Our first night was spent in the beautiful Peach Beach RV Park on the mighty Columbia River that forms the border between the two states. This park is unique in that it is on the river, family-owned, and in the middle of a peach orchard.

The Maryhill State Park is right next door, and is a gorgeous place with a beach, boat launch, camping, and lush grass right on the Columbia River. I loved staying at the Peach Beach RV Park, getting up early in the morning, and walking our dog, Bleu, along the river and through the park. It was a gorgeous setting, with picnic tables, large parking spaces, grassy areas, and a stunning view. We enjoyed it so much, we returned on our way home.

It has been added to my list of favorite RV Parks.

A Small Bump Along the Way

Next, we aimed for somewhere in the Bend, Oregon, area for our second night.  I usually call a few hours before our intended arrival time to find a place, but this was a Friday, which became a problem. As we got close to Bend, I pulled into a rest area and began my search for an RV Park.

We had intended on driving Cascades Lakes Scenic Hwy, but I knew it was getting too late, and I didn’t know what kind of road we would be on, or RV Park availability. We headed to the tourist information center. My hunches were right.  There were no RV Parks along the way.

We called the few RV Parks around Bend, but everyone was full. I left a message with an RV Resort, but time was running out to find a place. One RV Park manager gave me the phone number of a park in town that we could call, but she said it was under new ownership and needed some work.  Ok, well it may not be perfect, but we would have a place to stay, right? Out of desperation, we called, and headed for the suggested RV Park.

As I drove in, I wondered where the park was. The place was very small, dusty, with old rundown trailers –  basically a dirt parking lot. It didn’t feel very safe either, but because we felt like we were out of options, we checked in and paid for a parking space with hookups. I parked the rig in the dirt, and proceeded to connect the power. I was stung by one of several wasps guarding the power box. I finally got the power connected to box, but it didn’t work. Next, I tried to connect the water, which was situated below ground level, which put a kink in my hose, cutting off water flow. At this point, my frustration was showing, and I told my husband that this was not going to work for us. He said “let’s just leave, anywhere is better than here.”  I said “ok.”  I went to the manager and told him that we just couldn’t stay, and asked for a refund. He kindly refunded our fee, and we left. We had no idea where to go. Then I checked my phone, and I saw that the RV Resort that I left a message with earlier, called me back, and said they had one space left! Panicked that the spot might be taken by now, I immediately called them back, and it was still available, so we took it. It was at a shocking and very steep cost of $100 for a night, but we slept well that night! 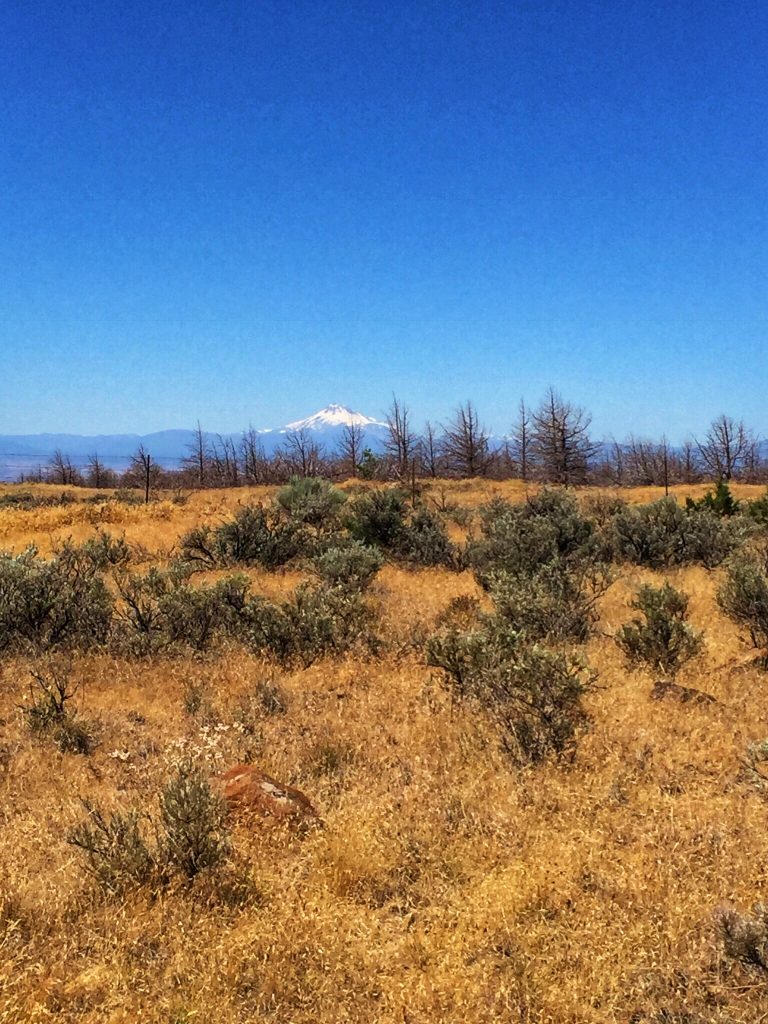 We decided to skip the Cascade Lakes Scenic Hwy, and hit it on the way home, so our RV trip to Crater Lake continued south on Hwy 97. There was plenty of stunning scenery to feed our souls along the way. Especially all of the mountains in Oregon that you can view from the highway. So many mountains in Oregon! I am not sure of their names, some possibilities are  “The Sisters,”  maybe Mt. Washington, and Broken Top Mountain, or Mt. Bachelor. They are all so spectacular and grand.  I wish I could identify all of them, but maybe next time I will be able to get a better idea of what we were actually looking at. It was a view to savor, with snow-capped mountains, golden wheat fields, with grazing cattle and horses dotting the landscape.

Unfortunately, shortly after we returned home, a fire had taken it’s toll in the region, and destroyed numerous acres, and wheat fields. It’s so sad to see our beautiful lands reduced to ashes, along with the lives lost, and livelihoods affected. 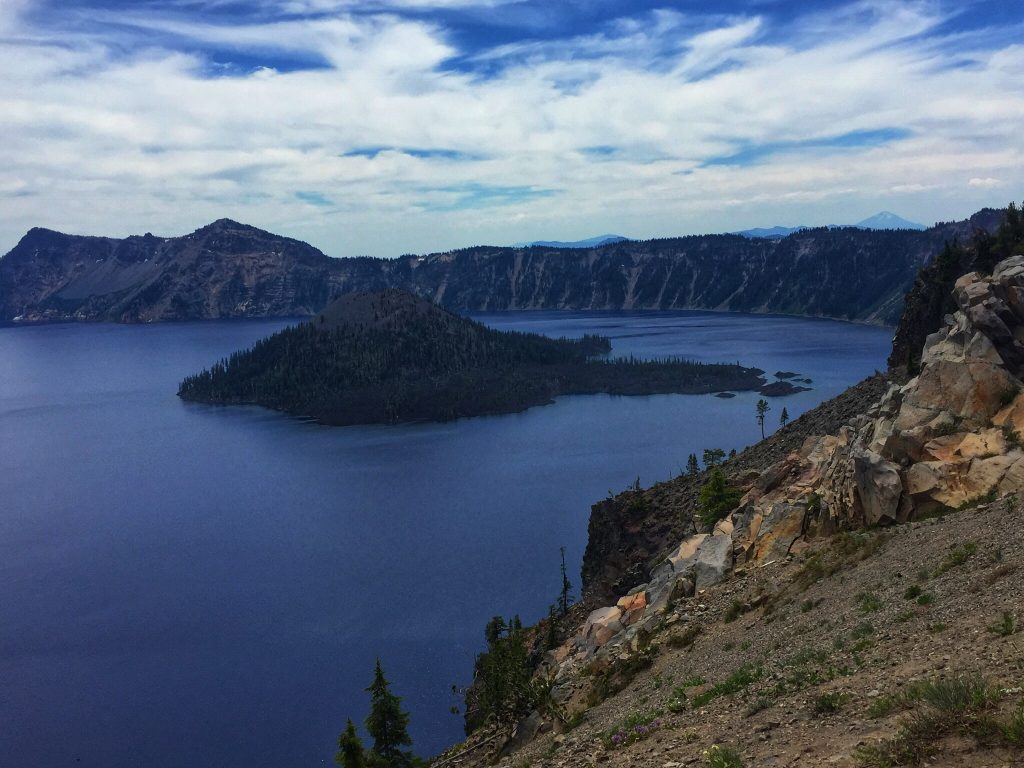 Our RV Trip to Crater Lake

As we continued our trip towards Crater Lake, we were weaving through a forest of pine trees. We could see the forest vegetation was tinder dry, and knew there were fires not too far from the area. We have never been to Crater Lake, Oregon in all the years that we have lived in the Washington and Oregon area, so I was looking forward to experiencing it for myself.

We finally arrived at the turn-off for Crater Lake Rim Scenic Drive, and headed up to the Entrance gate. I’m sure glad we have our National Park Pass, and that we bought it when it was cheap. The price has increased substantially from the $10 we paid. As we drive up, I begin to anticipate the view, as we begin to see some unusual and beautiful landscape, and a definite climb upwards begins. Remember, I am driving a 25 ft motor home, and the road is becoming a little curvy, and narrow.  I did ask at the entrance if the motor home would be a problem and they said it would be fine if we stayed on the west rim. Apparently, there was roadwork on the east rim at the time. The road was in good condition, it was just a little narrow, and drop off without guard rails had me a little skittish.  Most of the travelers were in cars, although I did see one other small motor home, as they were coming down from the Village. I was able to stop and get a couple of random photos as we headed towards the West Rim Village.

It wasn’t long before we came around a large curve, and got our first glimpse of Crater Lake! It was so extraordinary, I could not wait to get to the Scenic View Pull-out to take it all in, and get some photos. I was finally able to park the RV, and get out for that jaw-dropping view. The place was swarming with what we thought were some sort of butterfly, but they were actually a type of moth that hatch in huge numbers around the Lake. The Lake was so crystal clear, and pristine looking. I couldn’t stop looking at this unbelievable place, and appreciate the mysterious ways of mother nature.

One’s Destination is never a place, but new way of seeing things

Crater Lake basin is the result of a massive eruption 73,000 years ago, where the mountain peak once stood. The mountain, literally, could not support it’s own weight, and collapsed forming the caldera. Rain and snow eventually filled the basin, that is now known as Crater Lake.  There are no streams that run into the lake, so there is little sediment. It is the deepest lake in the US and it’s blue water is unmatched in purity. According to geological findings, local tribal ancestors may have witnessed the eruption event. The Lake has become  part of tribal rituals in the area, as they believe spirits inhabit the volcanic terrain that hold great power. The tribes still hold these sacred ceremonies around the lake.

Seeing this lake was awe-inspiring, and I now wish I had ventured further up the road to see some of the other interesting sights around the lake, such as Vidae Falls and Pinnacles. But, since it wasn’t safe to drive the East Rim, because of road construction, we wouldn’t have had access. Now we have an excuse to go back again!

As we came back down from the Lake, we needed to find a place to stay once again. And, since it was still the weekend, many RV Parks were booked. We settled for one in Medford for the night. 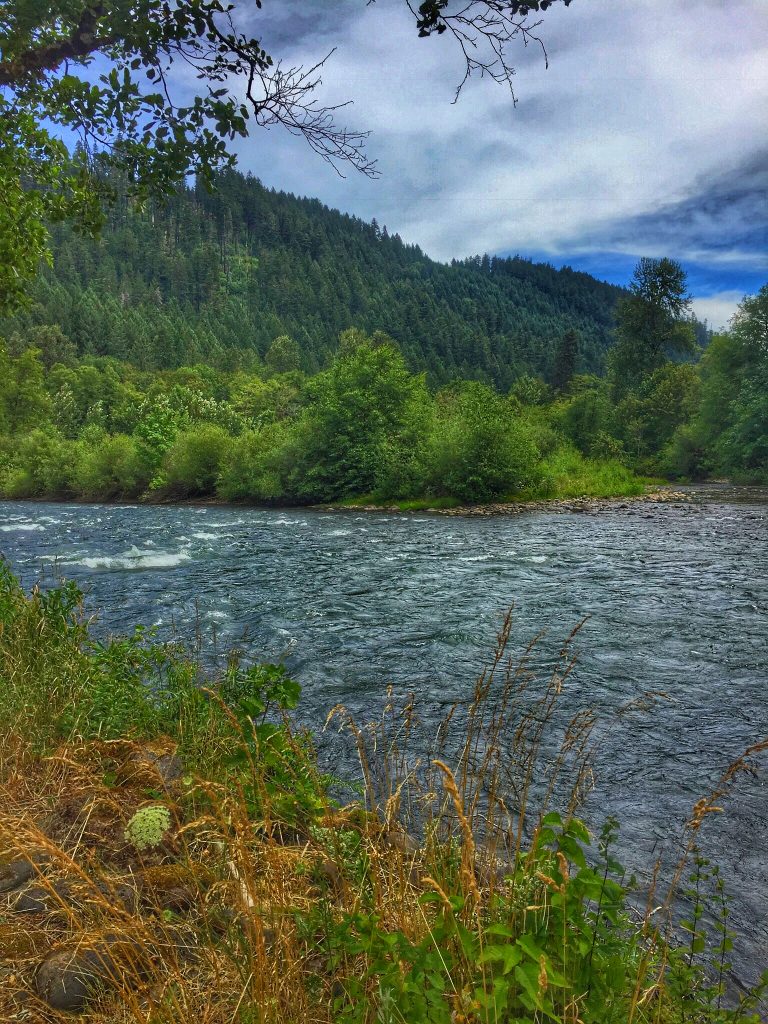 The next morning, I decided I should locate a place for us to stay that night. I found Casey’s Riverside RV Park, located in Westfir, in the Willamette National Forest, along the river. A place hidden in the woods, and a river running through it had my attention.  So I called, and reserved one night. We headed from Medford towards Eugene on I5. Not the most exciting views along I5 but still a pleasant drive. As we turned off I-5, we headed towards Oakridge, Oregon, which was about 6 miles from our RV Park.

As we arrived at Casey’s Riveside RV Park, I felt immediate calm, and was looking forward to checking in and getting settled for the night. We had been traveling in extreme heat for a few days, temps were in high 90s, and 100 plus. The shade cover of the surrounding woodlands, and the cool river meandering through the RV Park was welcoming. Although it wasn’t a good swimming area, it was just nice to walk, or sit, and bask in the soothing water flowing over the rocks and through the trees. We enjoyed it so much, we decided to stay a second night, and were able to move next to the river.

It was a perfect evening to grill up some burgers. Mine was a chicken burger, and my husbands was the traditional beef burger, but there is something about food cooked on a grill. I swear you can taste the outdoors. We soaked up as much fresh air, scenic tidbits, and relaxation as we could during our 2 days at Casey’s Riverside RV Park.

In the morning, we packed up and began our trek home. We wanted to do the Cascades Lakes Scenic Bi-way Loop on the way home, since we missed it earlier. We drove through the small town of Oakridge, then turned onto the Cascade Lakes Hwy. We had our map from the tourist information center we visited earlier, so we knew the locations of the lakes, mountains, and other scenic sights of interest. We didn’t stop at any of the locations, but the drive was memorable. The scenic loop is about 60 miles long, and the lava flows from the past were spectacular.

Mt. Bachelor became very prominent, as we got closer to Bend, Oregon. It was a drive that didn’t disappoint, and we will do it again when we have more time to explore it.