Old Route 66 and the Views to Remember 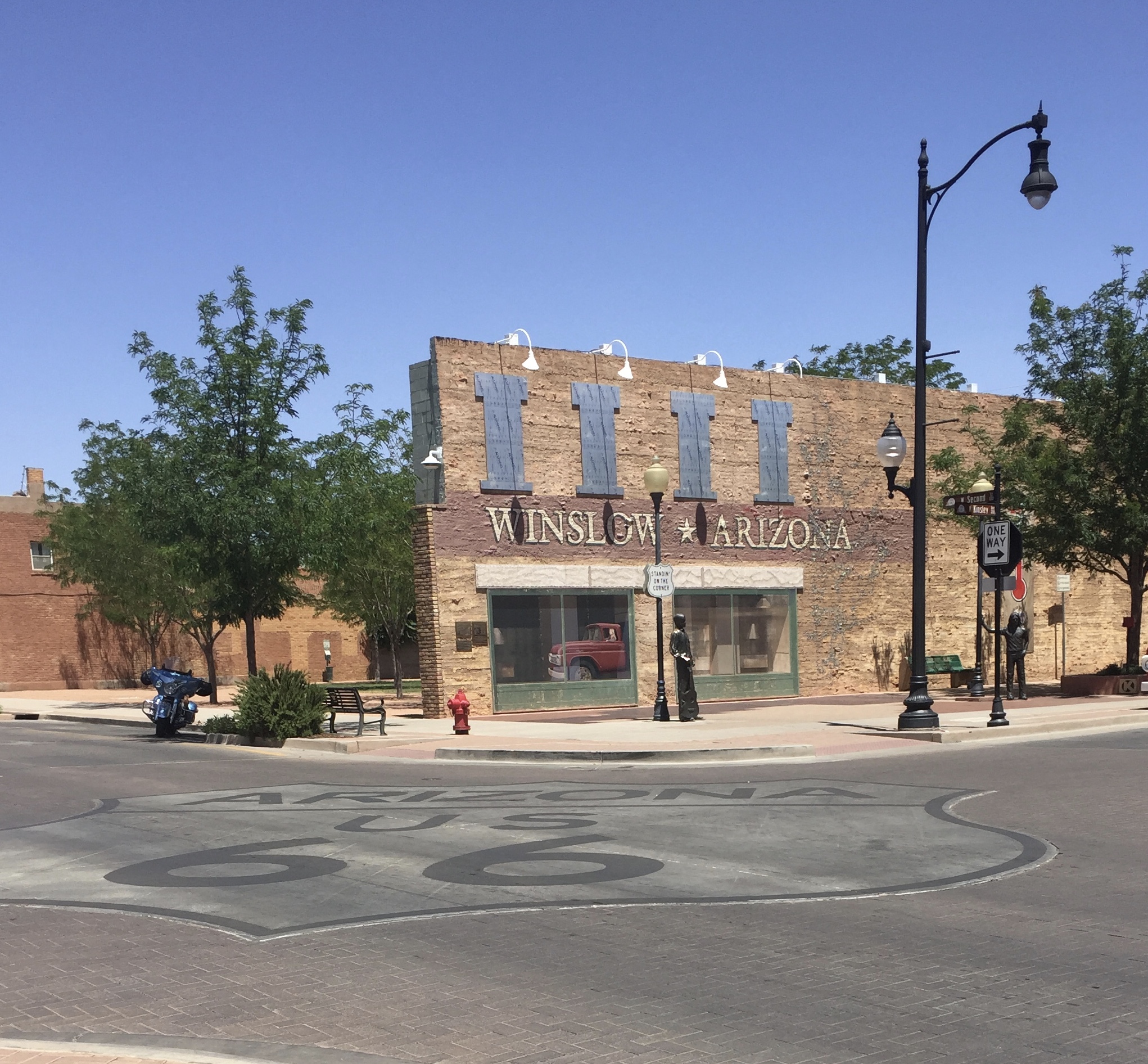 Our goal for this trip was to experience some of route 66 in the western U.S. through some of California, Arizona, and New Mexico. The main target for us was “Standin’ on the Corner”, in Winslow Arizona. We love the Eagles, so we just had to go there! I had to get a photo of my husband standing on the corner in Winslow, Arizona!

So, with that in mind, we didn’t really make any other plans for the trip. We just figured we would wing it. We started out coming down from Newport WA, where one of my daughters lives, and headed towards 395 South. I had driven 395 before to Reno several times, with my mom, and found it to be a pleasant drive.

Using Kingman, Arizona as our Route 66 starting point made the most sense. As we made our way south, we had the unpleasant experience of running over a quail that ran in front of us. That’s always one of my biggest fears, as I drive the RV. Poor little quail! I tried so hard to miss it, but…RIP.

Our road trip continued, and as we get into California on 395, and entered the mountains, the scenery was mesmerizing. We drove along beautiful snow-capped mountain tops, crystal clear streams, and wild flowers sprinkled the landscape with color as we climbed to nearly 8000 feet or more. From the top of Vista Point, California, the view absolutely took my breath away. As we made our way around the curves, and up the mountain, I even caught a glimpse of a bobcat crouching across the highway. My husband missed it, but I was lucky enough to see him. We had no idea that our trip would include such a feast for the eyes, and the soul. It was almost too much to take in. As we were cruising along the mountain road, I can honestly say, that there just weren’t enough opportunities to pull over and take photos, so most is stored in our memory.

There were the occasional scenic spots that provided the perfect place for making a sandwich, relaxing for a moment, and enjoying the view, though. Ah, RV traveling has many perks, and that convenience has to be one of them.

At one point, as we entered the outskirts of Death Valley, I somehow got off on the wrong highway, which made for an interesting, although scary, drive. I believe it was highway 50. As we started on the road, I knew something wasn’t right when we saw warning signs of steep grades, narrow road, and curves. It didn’t feel right, but we thought we were on the right road and kept going. Sometimes GPS is more confusing than helpful. As we made our way, it became more evident that we were on the wrong road, but there were no spots to turn around. We were stuck, and hoped it would eventually lead to one of the major highways, such as 95 or 395.

At one point, I got really scared, as steep rock formations appeared on both sides, and a sign that said “one lane road” while twisting and turning on blind curves. I felt like we were crazy to be on that road, but we didn’t have a choice at that moment but to keep going. I slowly proceeded around the curves, and discovered that the “one lane” was only for about 500 feet, so why didn’t it just say that on the sign? After that scare, a semi approached from the other direction – yikes! We stayed on this roller coaster of a road for a good hour or more, until we finally started seeing signs leading us back to the main highway. It was quite the experience, and so desolate, I didn’t know if we would run out of gas, or run out of road, or what the heck was in front of us. And, no cell service as we moved through the mountainous terrain, but we survived!

Beautiful desert scenery surrounded us, as we made our way to Kingman, Arizona, and onto Old Route 66.

As we got closer to Kingman, Arizona, we decided to find an RV Park in Kingman area. I stumbled upon Fort Beale, and this intrigued me, since my maiden name is Beal (without the e), so we spent the night at Fort Beale RV Park, on Beale Street! It was a small, clean RV Park with a nice pool. The next morning, I took the dog for a walk into the historic part of town, and took some photos of the Sante Fe train, the Route 66 Museum, and Mr D’z Diner. I was anxious to get driving down Old Route 66, though, so we packed up, and hit the road.

We decided not to venture to Oatman, on the advice of the locals. It’s a somewhat dangerous trek, especially with an RV. Apparently, a narrow road, steep pass, no guard rails, etc., so no thanks on that part of Route 66. Maybe with a 4 wheel drive vehicle or something, it would be fun, and less intimidating.

We arrived at Hackberry General Store, after a fairly short drive from Kingman, going east. I expected to see a lot more along the way, but it was just a few random, old, run down, graffiti-filled buildings. Some were interesting, and some were just old and nothing special, but it did give you a glimpse of what it might have been like back in the day. The Hackberry General Store was filled with Route 66 memorabilia that the owner had collected over the years. Some of it was original to the General Store, but much of it had been brought in after the fact. There was a lot to see inside, and outside, the store. We spent some time browsing, taking photos, and just enjoying the ghostly sights of Old Route 66. Gas pumps that once pumped gallons of gas into those now antique vehicles, as they crossed the US on the Mother Road. Juke boxes that adorned diners, neon signs, and all things that spoke of the past. We had to pose with the corvette and the old truck, of course, and the old gas pumps! Oh yeah! I bought my little Route 66 Highway magnet for my little Ramblin RV, as a souvenir. I was here, driving the Mother Road! 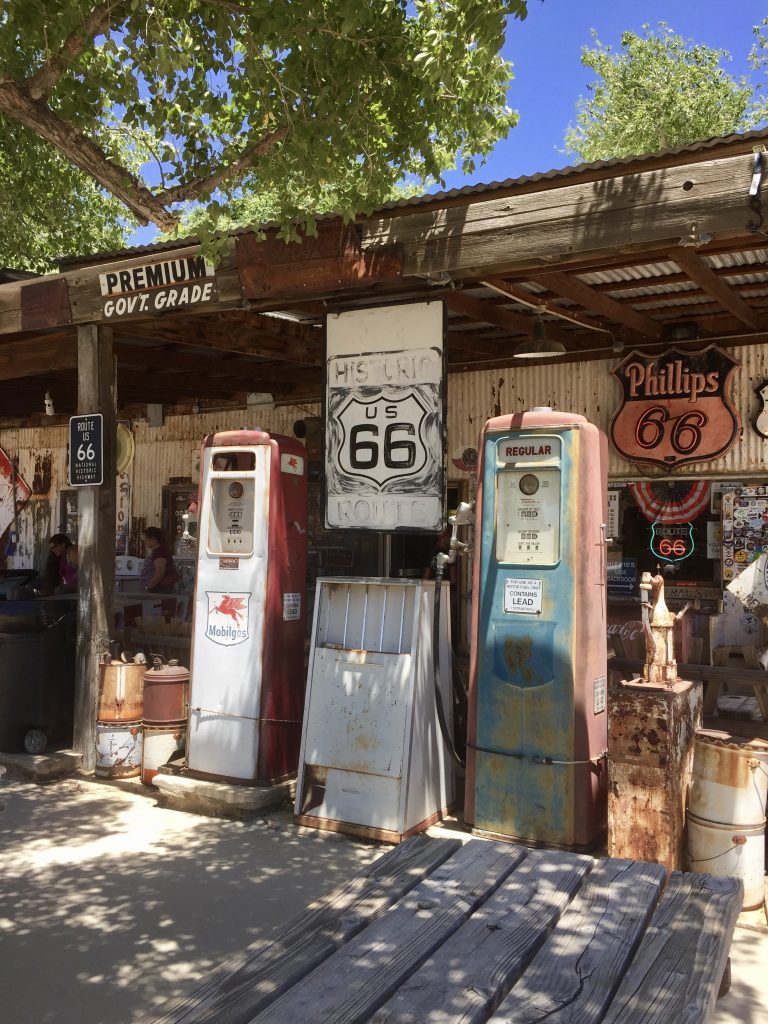 Standin’ On The Corner

We continued along Route 66 through Arizona, but it leads you on and off I40 several times, where Route 66 is no longer accessible. Route 66 goes right through part of Flagstaff, Arizona. We still saw some of the Route 66 attractions along the way, but we were getting closer to Winslow, Arizona, and felt the anticipation.

Winslow absolutely has the feel of the past, and as we came into town, we could see the corner! When the Eagles song “Take It Easy” was written by Jackson Browne and Glen Fry with the words “Well, I’m a standin’ on a corner in Winslow, Arizona and such a fine sight to see. It’s a girl, my Lord, in a flatbed Ford slowin’ down to take a look at me.”, it restored tourism to Winslow. Winslow was a thriving town in the 60’s, until around 1977. When I40 opened, and bypassed Winslow, the town died. The town was reawakened, by taking advantage of the mention in the Eagles song “Take It Easy.”  People travel from everywhere to take a photo on the corner, with the statues that pay tribute to the Eagles in Standin’ on the Corner Park, which opened in 1999. It was nice to “Take It Easy” in Winslow, Arizona. It was a thrill be there, and a memory to keep. I know my husband enjoyed that stop on the Old 66.

Next, we headed into New Mexico, along a few stretches of Route 66, and to be honest, we weren’t that impressed with New Mexico. Or, at least, the little bit of New Mexico that we explored. We did stay at Sante Fe Skies RV Park outside of Sante Fe. I loved the way it was laid out, in it’s natural surroundings, giving almost everyone some sort of privacy, and views. They operated on 50-70% solar power and provided nice areas for the dogs. They had antique equipment, and metal artwork throughout the park, created by Joe Forrest Sacket, a local artist. We also enjoyed fantastic Sante Fe sunsets.

The next morning, we followed highway 25 up through Denver. We did not stop in Denver, as traffic was a nightmare, and we are not fans of big cities anyway. We like to get out of the big cities. We elected to spend the night in Pikes Peak RV Park, in Manatou Springs, Colorado before driving through Denver. The park had a beautiful setting, with plenty of potential, but we will never go back. The spaces were so tight, we felt like we were packed in like sardines. We like some space to enjoy the surroundings, and that was not possible in that park. Fees were also high at this park, and no discounts offered.  Anyway, we headed out in the morning and made it through Denver, and into Wyoming.

We found driving through Wyoming to be beautiful, with green, grassy meadows, rolling hills, and of course the beautiful mountains that surrounded us, such as the Grand Tetons. It was serene, peaceful, and even enjoyable.

Billings, Montana was our choice for the next night, and we stayed in a very quaint RV Park, Billings RV Village RV Park. It was meticulously well kept. Even though it was in the city, it felt like you were out in the country. Each site had a nice grassy area, level parking, and wide spaces. The management was very pleasant, and friendly.

Home was getting closer, and we figured 2 more nights would get us there. Fairmont RV Park in Montana was our aim for the next night, which is a wonderful RV Park, where we have stayed before. Our last night was in Wallace RV Park, in Idaho, another one we like. It’s nothing fancy, but sits along the creek, and woods, with a Brew/Pub on the premises. A great place for a yummy dinner and brew! If you haven’t been to Wallace Idaho, it’s an old silver mining town, and well worth a stop. In the middle of town, there is what they claim to be “The Center of the Universe.” The area is in the mountains, and well known for recreation opportunities.

Final Thoughts On This Route 66 Trip

I think our expectations of Route 66 were too high. It did not live up to what we were expecting. I realize we only did a very short segment of it through CA, AZ, and NM, and some of it was worth the effort, like Winslow. I, honestly, enjoyed some of the scenery we drove through on the way down more than parts of Route 66. If you just want to experience a little of what once was, and drive the historical highway, maybe you will “get your kicks on Route 66”.